Yes I’d like many less (fewer) of you please. 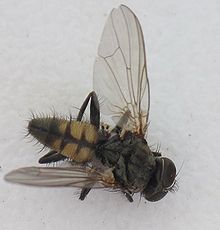 It’s nice to identify things that seem rare and exotic but even better to get the common stuff that’s driving you mad.  These are the pissy little flies that swarm around the living room light when it’s not even on.  Apparently this is a territorial patrol only conducted by the males.  John is tall and his head collides with them.  He goes ballistic with the fly swat like a deranged mad-man on speed.  Sometimes he even has baby Ted strapped to him while he passionately pursues his killing spree.

As these guys breed in and regularly visit dung (there’s lots of pastoral fields around here) John is doing a splendid and well justified job.  The identification of this species seemed pretty easy.  The specimens were, of course, all stone dead which helped.  My two insect books described their behaviour as follows:

‘Male flies incessantly around lights and other objects indoors’

‘Abundant in houses where males circle relentlessly around lights and other objects.’

2 thoughts on “The Lesser House Fly”