Today we had a little family gathering for Izzy’s birthday.  She is 2 next Friday.  My sister came along with her 3 children.  We let the older two loose with bug pots.  Amber managed to catch a bumblebee, brave Amber, but later I took them up to see the Ragwort behind the labavan.

Finlay, super enthusiastic as ever, caught a strange looking creature.  It had quite a blunt head.  John thought it looked like a cricket and Jane was looking up leafhoppers.  It was fairly lively at first but seemed to die quite quickly.  Strange.

It got put on the side for later.  After, yes after, the clearing up was done, I had a look.  I was pretty sure Jane was on the right lines with the Leafhoppers but couldn’t quite match it up to anything so got my stronger lenses out.

AH!  It all makes sense now.  This creature has no head.  Finlay must have decapitated it with the bug pot lid.  Amazingly I still managed to identify it.  It was a Mirid Bug (Stenodema laevigata).   These are abundant in long grass of all kinds.  I have to say I’ve never noticed one before.  Its camouflage is impeccable. 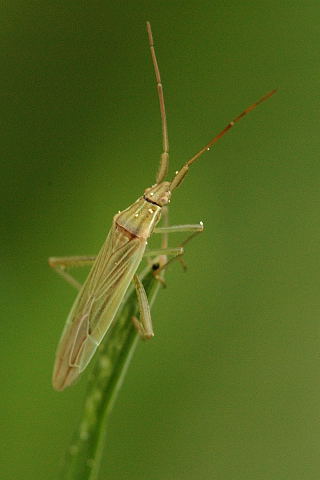