John has fixed up my beast of a compound microscope, (it makes me fancy him more when he does manly things like that, sorry puke).  I call it the micromacrobeast (the microscope….) Ooh, the excitement, I can chop up lichen fruits (apothecia) and look for spore sacks (asci) and spores (spores!).

I’m bloody rusty at the slicing technique though.  You have to slice sections through the apothecium, which is less than a mm wide.  If you wet the specimen your razor blade get stuck to it, if you keep it dry it pings off never to be seen again.

I did get to see some exciting spores in the end but not until I’d dealt with all of the pigeons.  I say all of the pigeons, well two pigeons. Two sharply descending pigeons is a major event in a life like mine.  The first one dropped and hit the kerb, it was dead.  It was a racing pigeon so I took it to Terry across the road.  He said the pigeon was from Nottingham and he’d call the owner.  He also told me it had been attacked by a Sparrowhawk.  It had a nasty wound on it’s neck.  Apparently they grab them by the neck in mid-flight.  No sooner had I sat down in front of the micromacrobeast (a microscope remember..) when I hear next doors chickens in a hullabaloo, see lots of floating feathers and yet another descending pigeon.  It was alive and hiding under the car.  We captured it and took it to Terry (he does actually keep pigeons I don’t just dump them on a poor unsuspecting neighbour).  This time it was one of his.  It is getting stitches in it’s neck and a warm cup of chamomile tea.

Anyway, I’ve identified a few lichens and a moss today and found a good population of rushes growing in our soaking lawn.  The celandines are doing well too, unsurprisingly.  I’ll leave you with a family snapshot: 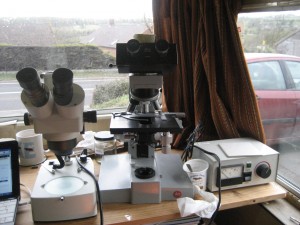 Mwwahaa! No health and safety rules in the labavan. I’ve been drinking tea and eating yogurts.

3 thoughts on “The garden is wet and I am rusty”